The birthplace of the Olympic Games, the “Valley of Gods”…

Olympia is widely known as the original site of the most important athletic event, the Olympic Games. Up to this day, the Olympic Flame is still lit here for the modern Games.

The destination is extremely popular and attracts millions of visitors every year. Moreover, Olympia is easily accessible from other parts of Greece.  It is less than 4 hours away from Athens and only 1 hour from the port of Patra, or Kalamata airport.

POINTS OF INTEREST
The Ancient Stadium of the Olympic Games
The stadium of Ancient Olympia was a holy place for the ancient Greeks and all the sports activities were dedicated to the god Zeus. Furthermore, the ancient stadium was also used to host the Heraia Games (which were games for women), held in honor of the goddess Hera.

The Archaeological Museum of Olympia
Do not forget to admire the Hermes of Praxiteles, a peerless masterpiece.

The Sanctuary of Olympian Zeus
The ruined Temple of Zeus stands today in the archaeological site of Olympia and was built to honor the chief of the gods. It was probably constructed around 470 B.C when the ancient Olympic Games were at their peak.

The Temple of Hera
The temple of goddess Hera was originally a temple for both Zeus and Hera. In the 7th century, this temple was built of wood, but afterwards the wood was replaced by stone. It is one of the oldest monuments in Greece.

Philippeion
It was an Ionic circular memorial, a tholos, which contained chryselephantine (ivory and gold) statues of Philip’s family; Philip himself, Alexander the Great, Olympias, Amyntas III and Eurydice I.

The Palestrae of Olympia
It was used to practice boxing, wrestling and jumping.
During the day you will have enough time for lunch (optional).

The price includes: Minivan transportation, chauffeur services and taxes.
The price does not include: The cost of a tour guide, entrance tickets for museums & archaeological sites, or any personal expenses.

The sequence of the full-day tour can be altered upon a client’s request, due to traffic problems, strikes or extreme weather conditions. 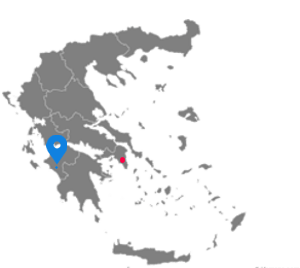